Cumulus is a ‘flock’ of neon figures conceived specifically for the Teco Corus buiulding. Cumulus inhabits the Soffit Zone, the Atrium Zone and then disperses through the building via the public passage way and into the North Lobby.

Sculpted in clear red neon the ‘figures’ are reminiscent of a flock of birds performing a complex and elegant choreography, frozen in space. However on closer inspection it becomes apparent to the viewer will that they are not in fact birds but rather simply lines, hand drawn, suggestive of the movement and grace of flight but not reducible to it. As such Cumulus remains metaphorically open and discursively quiet – it might be suggestive of the graphic ciphers of some unknown script or an unnamed galaxy or constellation. All and yet none of these, Cumulus is not prescriptive but rather susceptible to multiple meanings and interpretations. Playful and yet serious it is the precursor to a diversity of imaginings:

Conceived to inhabit all three of the designated locations Cumulus provides a coherent art intervention to complement and respect the clarity of the architectural scheme. The work introduces a distinct aesthetic in contrast with that of the architecture: it brings the gestural fragility of the drawn line and the ambiguity of the curve into juxtaposition with the rigorous linearity of the architectural aesthetic of the building. It is intended that Cumulus shows rather than states the ethos and life that will circulate within the building and creates a counter-narrative engagement with the users of the space. Cumulus is a work of significant scale that nevertheless retains a lightness of touch.

Neon used in this way has the advantage of having a strong sculptural presence.

It gives the work an intense night-time identity when the glow produced will ‘fill’ the spaces that the art inhabits and be highly visible from the lake, from the lakeside promenade and from inside the building itself. The day-time presence of neon is also strong when its graphic, sculptural qualities are in evidence.

It should be noted that Cumulus has at this point been designed so that it provides a degree of flexibility: it can inhabit all three zones, as proposed above, but it could also be reconceived to inhabit the Atrium and Soffit Zones (excluding the Passageway) or the Atrium and Passageway zones (excluding the Soffits). The draft budget we have submitted is for the scheme that inhabits all three zones. 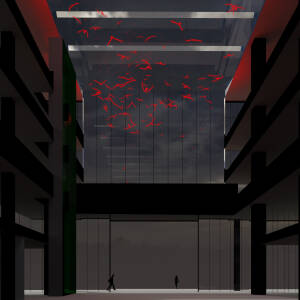 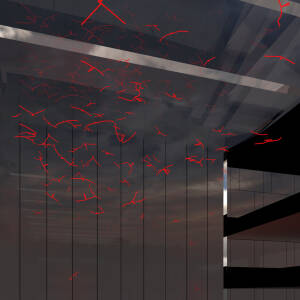