IT IS AS IF

Throughout 2014 and 2015 Phaophanit and Oboussier worked closely with Professor Roger Kneebone (Wellcome Engagement Fellow and Professor of Surgery at Imperial College London). Together they investigated the connections between art practice and the techniques and discourses of medical surgery. The artists requested to film the surgeon as he re-enacted an operation he had carried out 30 years previously, drawing only upon a mixture of memory and imagination. The operation was captured in one single shot of 44 minutes and tracks an uncanny sequence of rigorous and tender gestures: the surgeon’s hands de-territorialised, the absent body, moments of certitude alongside moments of hesitation and lostness

Through IT IS AS IF Phaophanit and Oboussier enter the landscape of memory in search of unmapped territories. Held within the skeleton of a sinewy timber labyrinth, two films draw upon the artists’ own memoryscapes and guide us through the uncharted post-conflict zones of Laos, the eddies and flows of the Mekong, the Thames and the system of arteries that make up Europe’s ‘great’ rivers. As we navigate the installation, within a clearing we are met with an uncanny sequence of precise and tender gestures: the surgeon’s hands de-territorialised, the absent body. Cut flesh, opened, held, sutured – the operated and traumatised body reveals the strangeness of our innermost selves and the uncertainty of our futures. IT IS AS IF explores embodied memory within a conceptual and phenomenological framework that invites the viewer to become lost within its network of passages and discover a new sense of place, time and meaning. The artists worked collaboratively with composer Palence to create the soundscape: a weave from the hybrid threads of sound from all three films that binds them together: each image landscape is drawn in the the territory of the other, unmapped. 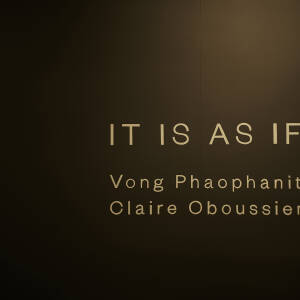 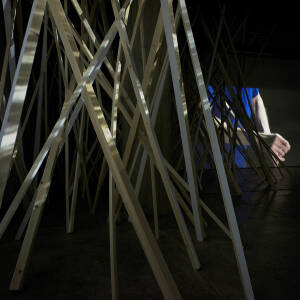 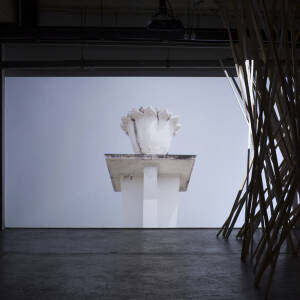 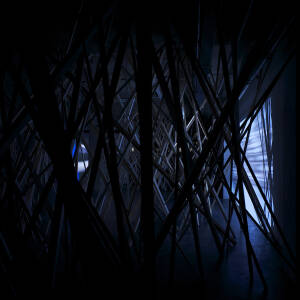 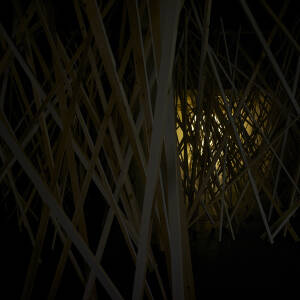 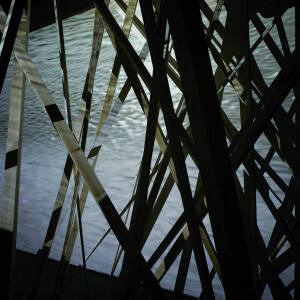 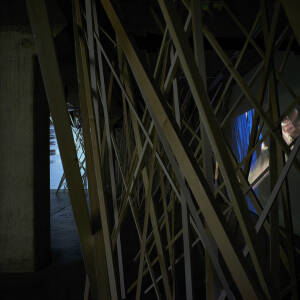 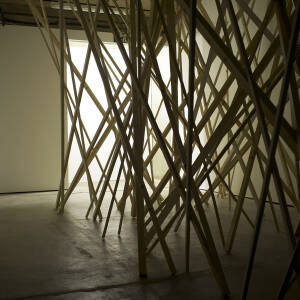 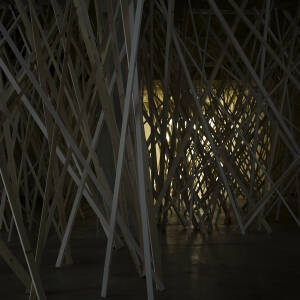 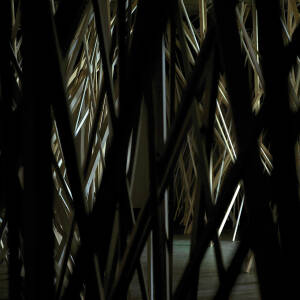 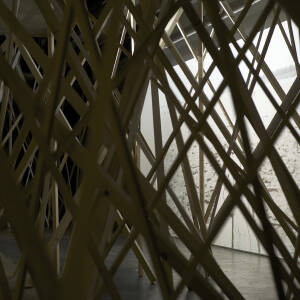 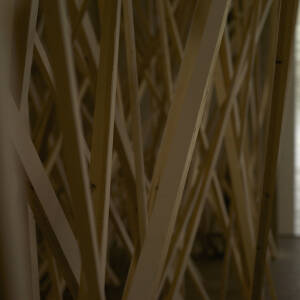 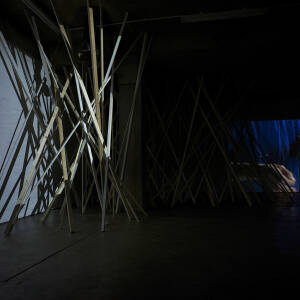 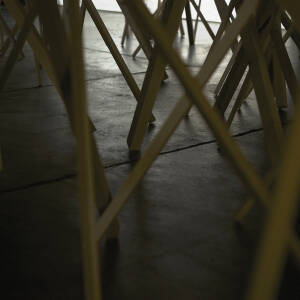 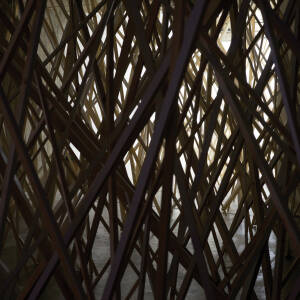 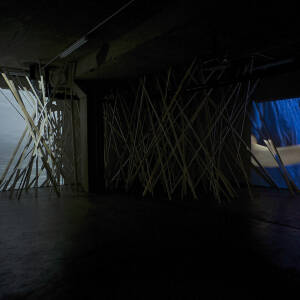 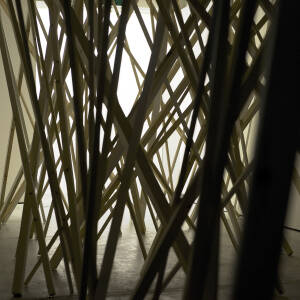 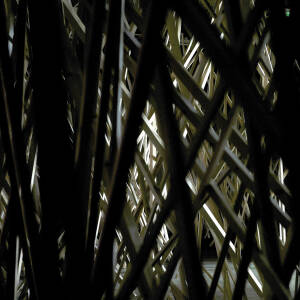 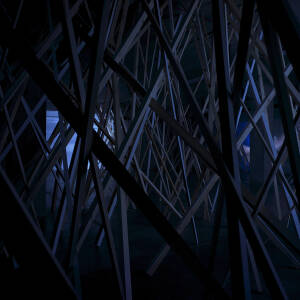 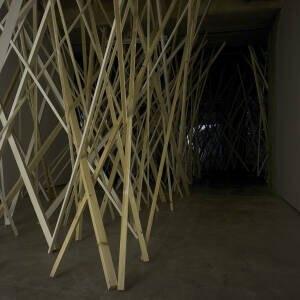 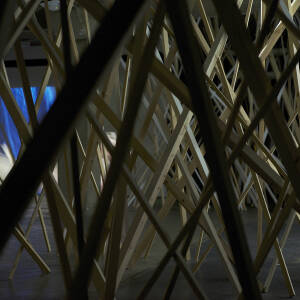 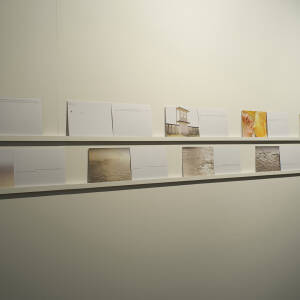 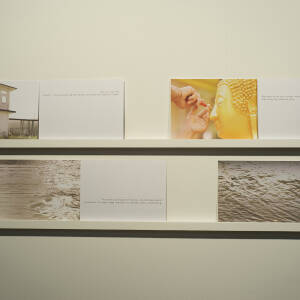 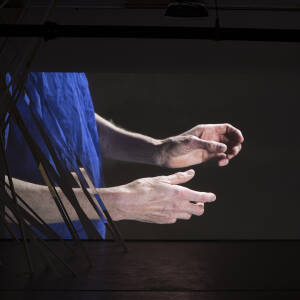 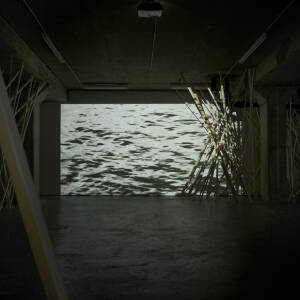 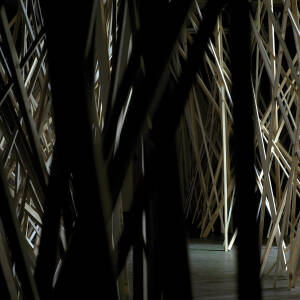 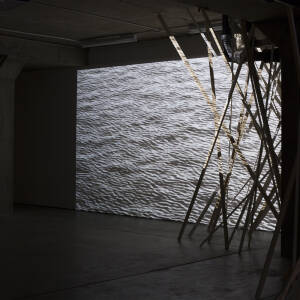 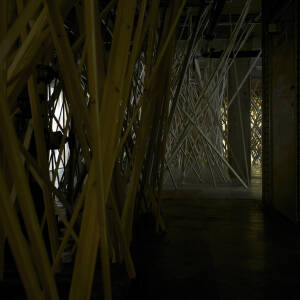 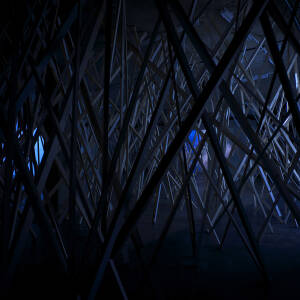 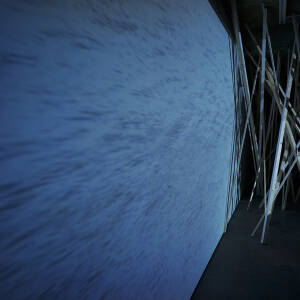 “Linearity has long been a trope of Vong Phaophanit and Claire Oboussier, who have worked together – at first informally and later as a collaborative partnership – for 25 years. While some may remember Phaophanit’s use of neon strips in his Turner Prize exhibition in 1993, his hanging forest of bamboo poles from 1991 and field of steel rods from 1998 are more obvious precedents. But something is different here. The beams are not aligned and do not hint at an overarching sense of spiritual order and serenity; instead this is organic – order by growth not design. At first, the impression on entering the space is of a shallow ocean environment, with the sound of trickling water combining with the dim blue video glow to suggest that these sticks are reeds, weeds or, better still, mangrove roots – the mesh that saved undeveloped coastal regions during the devastating Indian Ocean tsunami of 2004……Slowly, then, the work as a whole is revealed as being not so much about the effects of humans on the environment but rather how those environmental effects are absorbed back in the body generationally. How the self grows not only from an embryo – and the story of species evolution that this remarkable process reveals – but history too, a cultural evolution that incorporates its own tales of desperate life-and-death adaptation to periods of devastating change. The wooden rods are perhaps best understood not as mangrove roots or suspension poles holding the building up but rather as a connective tissue of protein strands or neural networks holding the imaginative space together; not a barrier or mechanical strut but a meshing generative growth. This is trauma and hope absorbed – and thus embodied.”