Commissioned to mark the post-conflict ‘re-imagining’ of Derry~Londonderry

‘Mute Meadow’ (2011) is a vast field of light conceived in direct response to the contours of the city that is its canvas. The work takes the form of an undulating landscape of reflective surfaces, columns of light that refract and fragment the surroundings, enabling the viewer to see them in different and less structured ways.

The meadow begins, quite sparsely, along the southern perimeter of the parade ground of the former British Army Ebrington Barracks, forming a kind of pathway that leads down through the banked area where its presence begins to extend. From there it moves down into the space adjacent to the River Foyle where it multiplies and becomes much denser – resembling a ‘forest’ of light. 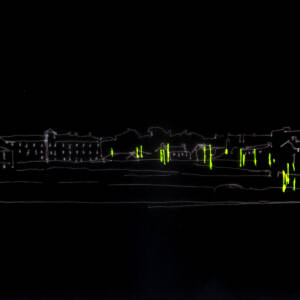 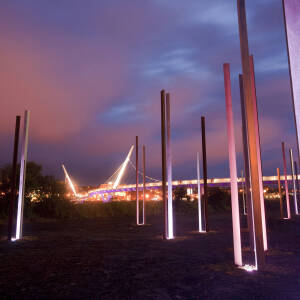 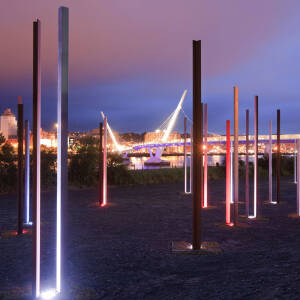 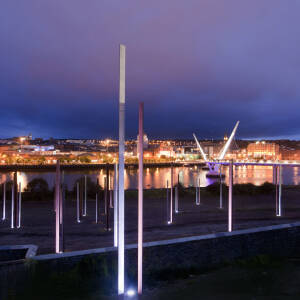 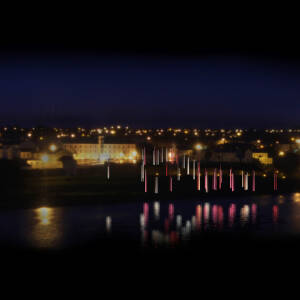 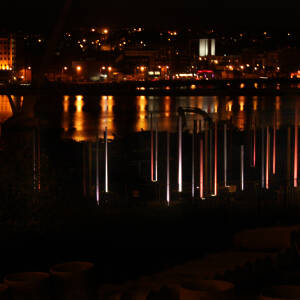 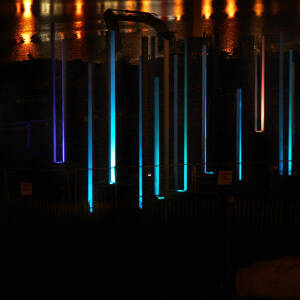 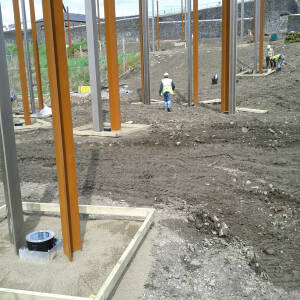 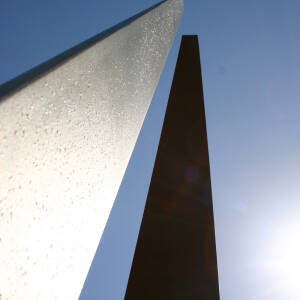 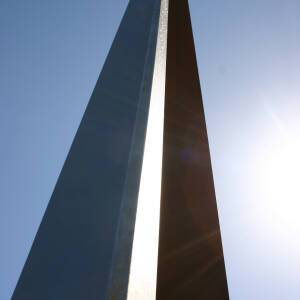 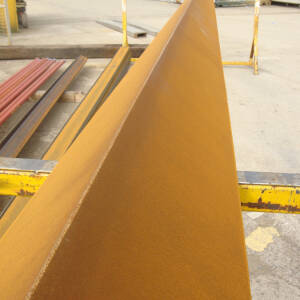 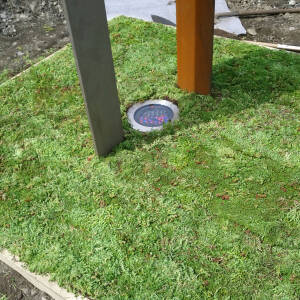 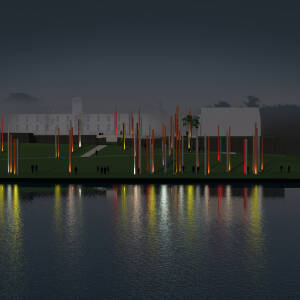 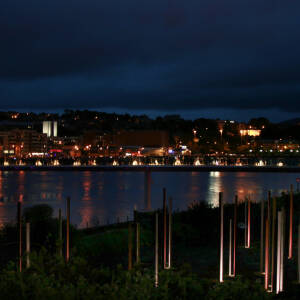 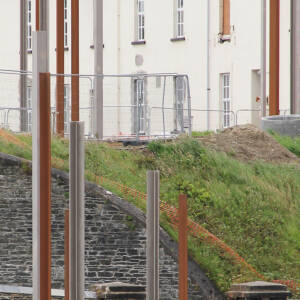 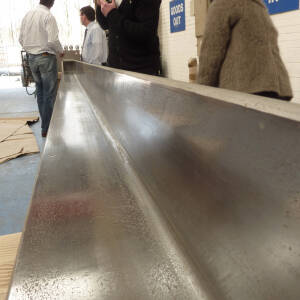 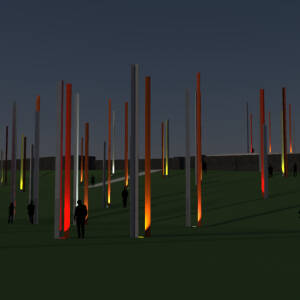 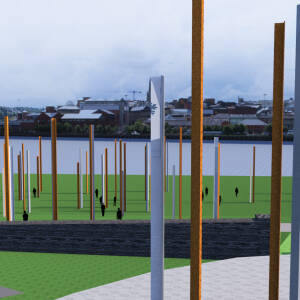 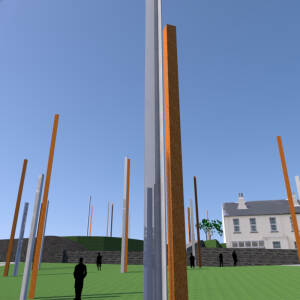 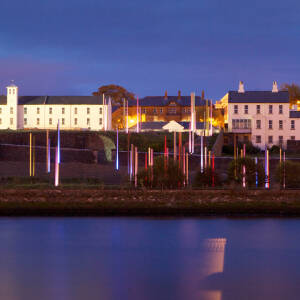 The work introduces a play of levels and vistas as well as the experience of a journey: the viewer is able to traverse and explore the meadow of light; there are internal open spaces, ‘clearings’ created within its mass. The meadow’s specific formation has been conceived to harness existing elements of the urban landscape such as the retained wall of the star fort and the sloping bank leading down to the river. The choice of Ebrington as the site allows Mute Meadow to be a work of significant and imposing scale. It maximises its visual impact and its conceptual resonance and ensures that the work is embedded into the heart of the city. Vitally, the meadow of light is highly visible from the old walled city across the river and, in turn, the site of the work offers prime views over the river to the walled city opposite.

Each light column is composed of two elements of angled steel of six to eight meters in height – one corten steel and the other nickel plated mild steel with a shot blasted finish on one side and a polished finish on the other. An LED light component is used in each column to up-light the surfaces of the steel. During daylight hours ‘Mute Meadow’ is in perpetual transformation according to the changing natural light conditions.  The site and the positioning of the work use the full potential of the trajectory of the sun to create a natural play of shadow and light.  At night the work transforms, aesthetically and conceptually, and the reflective surfaces become the producers (rather than the receivers) of light. With the diminishing natural light, gradually ‘Mute Meadow’ begins to glow with artificial light until it becomes an immense floating field of light of changing intensity, almost as if it is breathing. This transition from day to night, from natural to artificial, takes place progressively, almost imperceptibly: a kind of symbiosis of these two polarised states.

The concept of ‘Mute Meadow’ is not a prescriptive one: the metaphorical levels at which it plays remain open; it could be suggestive of a constellation, a forest, a sea or a vast crowd of people. The work avoids an illustrative or narrative approach to its surroundings and rather acts as a silent, reflective cipher of the city of which it is a product. It is Derry, in all its complexity, that brings meaning to the work, meaning that can transform and be re-imagined in a continuous process over time.

It is with this in mind that we collaborated with the Verbal Arts Centre in order to look at ways in which ‘Mute Meadow’ might engage with the city of Derry and its citizens in a real way by developing channels of connection between work and place where the inhabitants of Derry become engaged in a process of production of meaning for the work. A range of specific groups within the community have been brought in to produce sound based data (verbal and musical) which is to be fed into the piece itself via specially tailored software to create a unique flux of light:

– the ‘breath’ of the city, beyond narratives, translated into light –

‘Mute Meadow’ encourages and generates critical debate in a non-didactic way: the concept of the work itself is ‘counter-narrative’ aiming to function as a precursor to and producer of ‘new meaning’ rather than as a repository of ‘old meaning’. The work remains metaphorically open and discursively quiet: it ‘shows’ rather than ‘saying’ its correlation to the polarised, contested history of Derry and, crucially, the potential and possibilities of the city’s future.

“The image for Mute Meadow emerged from a process of translation – listening, hearing and translating.  As artists our position as ‘outsiders’ was crucial. The work needed to somehow embody but not speak of the cultural and historical complexities of the place. It was vital that it did not become illustrative or didactic it any way. So the idea of translation was crucial: Translate – to ‘carry across, to move beyond’. We thought a lot about Bachelard’s words: “ When the image is new the world is new” 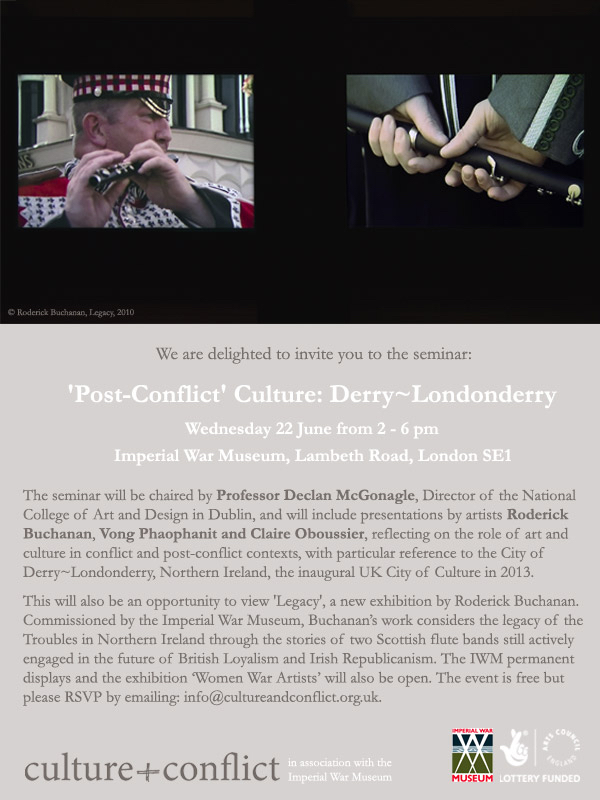 To view the press release for ‘Mute Meadow’ go to: