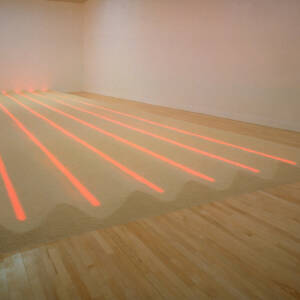 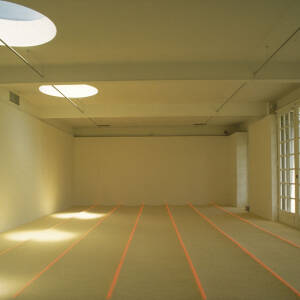 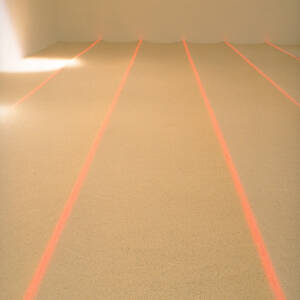 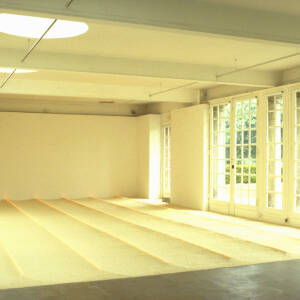 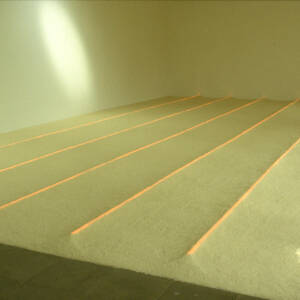 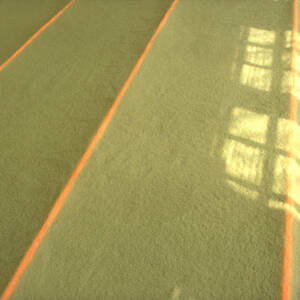 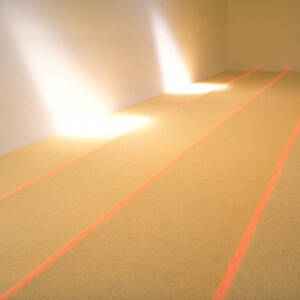 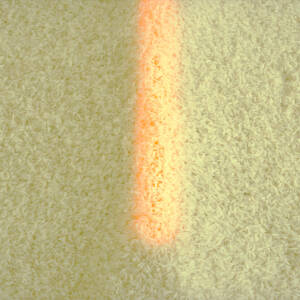 ‘Neon Rice Field 1993 is a large floor-based installation consisting of seven tons of dry, white long-grain rice underlaid at intervals with six parallel tubes of red neon light. The overall effect is of an undulating translucent field where the light glows amidst the rice. As with many of Phaophanit’s works, light plays an important role in this installation, binding together the different materials to achieve a particular visual effect. In addition to the work’s visual impact, the rice also generates its own particular smell, which pervades the space beyond the physical limits of the piece.

For the artist, Neon Rice Field relies on the ‘interactions of the materials’ (quoted in Tate Gallery 1993, [p.6]) and brings together two utterly disparate things, one natural and organic and the other manufactured and industrial. These materials carry cultural associations that have often been inscribed within the dichotomy between the Western and the Eastern worlds (in this instance, of industry versus agriculture). However, the cultural allegiances that might be attached to them are more complex, more problematic and more fluid than any dualistic reading allows for. Phaophanit often infuses into his work a discreet subversion of the narratives attached to the materials and, while rice is unequivocally a symbol for the East, he has in the past used American sponsorship to supply the rice to stage his work. Likewise, the presence of neon which could sometimes be assumed to represent the western city is also a feature of many Asian cities.

Unwilling to attach any predetermined meanings to the work, Phaophanit is concerned with the potential for ‘possibilities of meanings’, and he considers that the materials and their juxtapositions carry their own significance while, at the same time, they open the way to new associations. ‘Once you name all the meanings,’ he has said, ‘something still remains, something left over. That’s how I work. For instance, I use rice not only as a material, a substance, a smell or a symbol of food in the East, but I want to shake things – see what falls down.’ (Quoted in Irish Museum of Modern Art 1997, p. 96.)

Neon Rice Field was first exhibited at the Serpentine Gallery, London in 1993 and later the same year at the Aperto section of the 45th Venice Biennale. It was subsequently shown as Phaophanit’s contribution to the Turner Prize at the Tate Gallery, London in 1993. Over the years, it has been shown in different configurations but always incorporating seven tons of white rice spread over six lines of neon lights.’