‘The shape of Outhouse is literally like a small house, with side entrance and slanting roof; the scale of the building is calculated at around 70% of one of the small terraced houses nearby, also designed by the architect. There is a simple inversion of transparency and opacity within the house-design concept – the solid or opaque elements of the house walls and roof become transparent glass; within, the internal doors or openings become solid blocks of varying heights (the minimalist ‘primary forms’). The usual private nature of the domestic interior becomes open and social, but is still contained and protected. Outhouse is but few steps away from one of Liverpool’s arterial routes in and out of the city, yet maintains a certain air of composure, or non-compliance with the dynamics of the road.

There is something about the vulnerability, transparent and visually open aesthetic of the Outhouse that is socially unassertive, and does not present itself as an object to be accepted or rejected. Public buildings are usually and inevitably manifest gestures of authority, even if that authority is the social welfare system, or the profession of the artist. Outhouse, however, works in reverse; it seems to divest itself of social signifiers other than those emerging from its function. It is not historical, monumental, or an artist’s ‘signature’; and this is not ‘community art’, for its architectural articulation is too specific and urbane. Its function is both aesthetic and congregational – an articulation of the substance and movement of the surrounding light, and of community.

The scale of the Outhouse is neither typically domestic nor social, as a community centre; it does not look like a greenhouse; and it appeals to no typical form of social congregation. The interior is not an empty space, but is articulated with stone-clad objects, somewhat like minimalist ‘primary forms’. The social-symbolic aspect of Outhouse seems to be saying that ‘community’ is no longer something that can be presupposed, but has to be gathered: there is no simple category of community that can speak or be addressed, but community is an event. Outhouse stimulates a need for congregation outside the institutionalised forms of community familiar to most people. The conditions of that congregation are openness to the risks of unpredictable public interaction, and the vulnerability of transparency with regard to one’s intentions.

Phaophanit and Oboussier effectively surrendered their ‘moral rights’ to the Outhouse. Most public artists (rightly in most cases) protect their work from addition or alteration by public or owners. The moral rights of the artist, enshrined in the international Berne Convention of 1928, ensure that the physical and artistic integrity of a work of art is preserved regardless of ownership. Outhouse, however, has been ‘given over’ to the community, to both residents and other artists. Artists and event organizers Alan Dunn & Jitender Shambi have developed a number of events around the Outhouse since its construction, as part of the ‘Outhouse Programming Group’. With a beautiful website, Outhouse has become a fulcrum and site for community events, both traditional (the laying of poppy wreaths on Remembrance Sunday) and untraditional, as a performance area for contemporary music. The CD Project ’36 Compositions for a Woolton Jukebox’, saw Alan Dunn and Jeff Young perform their locally made sound recordings, with catering for tenants, artists and local residents sitting on the grass outside. In November 2005 the Outhouse was first illuminated at night by architects Mueller Kneer in ‘A Night Of Illumination’. With sophisticated projections of fairytale type characters, they transformed the glass structure into a walk-in lantern on what was St Martins Day. Around the same time leading sound recordist Chris Watson presented a keynote Outhouse lecture on the role of ambient noise in relation to the glass structure. ‘Outside in’ was the name for the series of workshops on exploring different designs for the glass surface of the outhouse; and artists Caspar Jones and Simon McKeown from Builtmaccaw have also been working with local Woolton residents exploring the site as a surface for projected imagery.

Community here is not institutionalised by a static enclosure or social facility, but awakened by a changing surface, mutable space, a site and place, around which and in which people can conceived other forms of congregation.’ 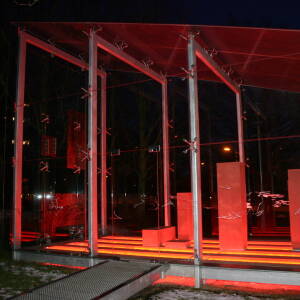 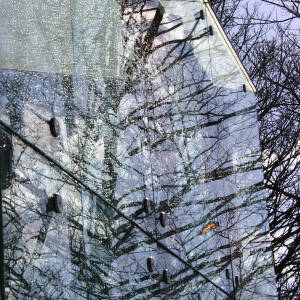 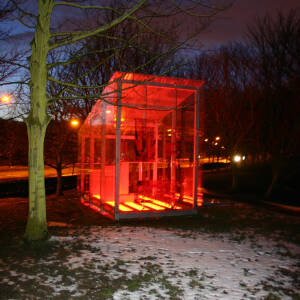 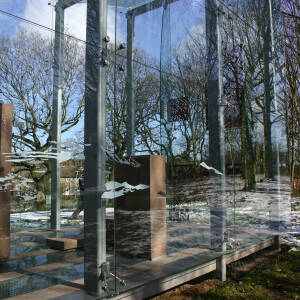 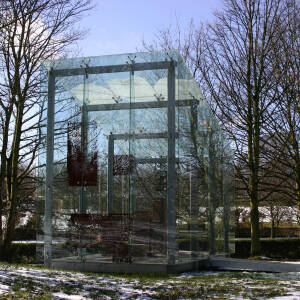 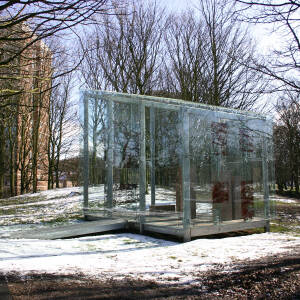 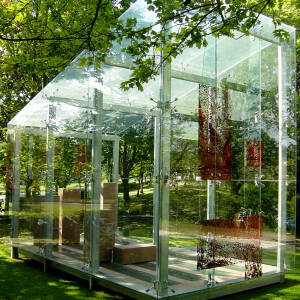 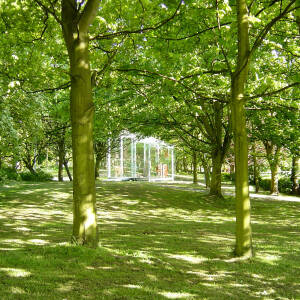 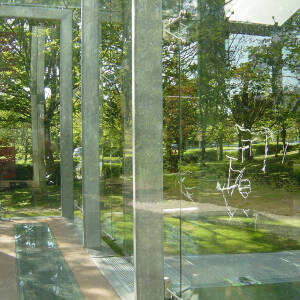 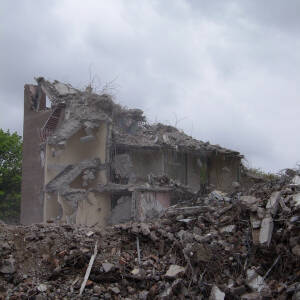 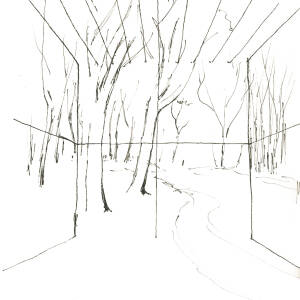 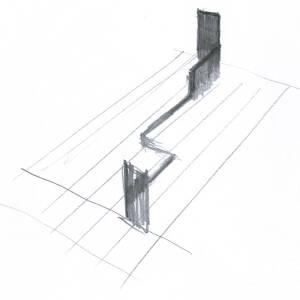 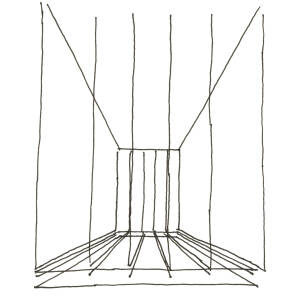 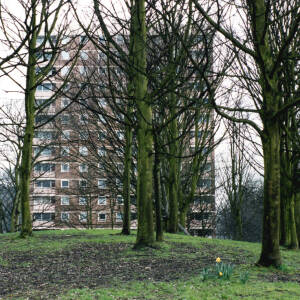 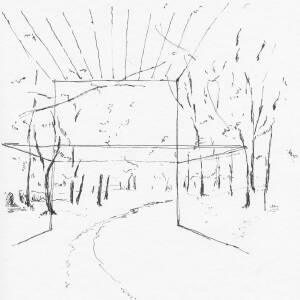 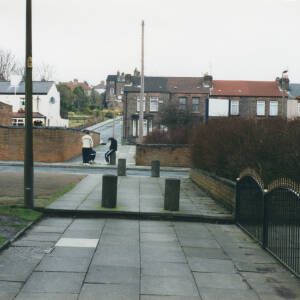 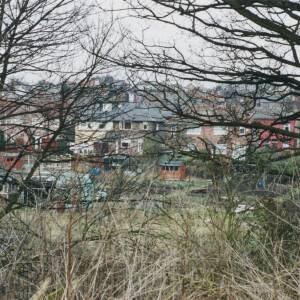 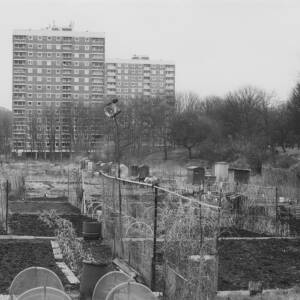 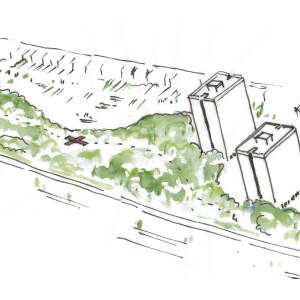 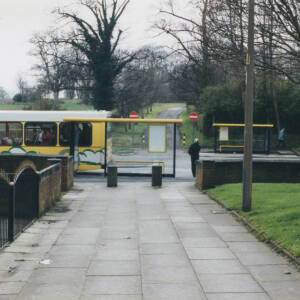 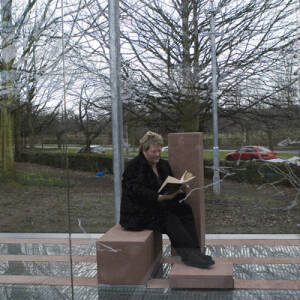 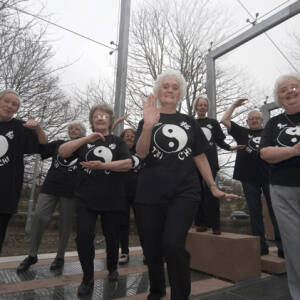 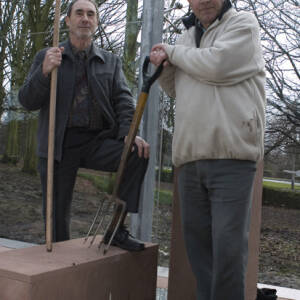 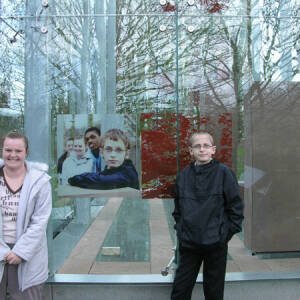 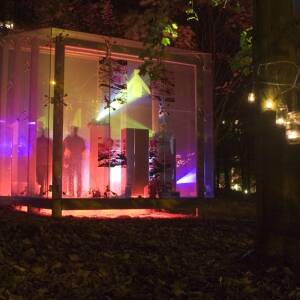 Outhouse is a steel-framed glass structure initially commissioned in 2001 by Liverpool Housing Action Trust (HAT) and managed by London-based art consultancy Modus Operandi. It forms part of a larger regeneration project in the area aided by the Guinness Trust, and is physically located in a woodland ridge running alongside an estate of four large high-rise housing blocks in Woolton, in the south eastern part of the city of Liverpool.

Vivien Lovell, Director of Modus Operandi and manager of the project, called it a ‘brave commission’, with a considerable investment made in the uncertain outcome of extensive community engagement and dialogue. A conviction was maintained, inscribed in Phaophanit and Oboussier’s initial proposal, that community aspirations and concerns for location, strength, security and social usage of the space would be incorporated into the project. A glass building would not seem a sensible choice, given the concern and cost of both maintenance and possible vandalism. The building, however, has stimulated a sense of collective ownership and become a fulcrum for a changing understanding of the immediate urban environment. It is now a symbol of a collective decision-making process and a site for ongoing congregation and performance. The artists declined an over-tight security programme, encouraging ’self-policing’ on the part of the residents.

The Outhouse has a unique aesthetic. There are many buildings made of glass that admit light, like greenhouses, but few appear to be a function of the behaviour of the light, as it is moves through and is mediated by space, place, weather and vegetation. The visual character of Outhouse radically changes in different atmospheric conditions. The laminated glass panels dissolve the antithesis between nature and culture, raw materials and technology; for the complex reflections and refractions of light mean that the movement and colours of surrounding vegetation are always animating the surfaces.  During the day, its architectural character emerges, as Outhouse is a place of meeting; but at night this recedes and Outhouse functions visually like a sculpture, enclosed within its own space it resonates the red neon from the flooring.