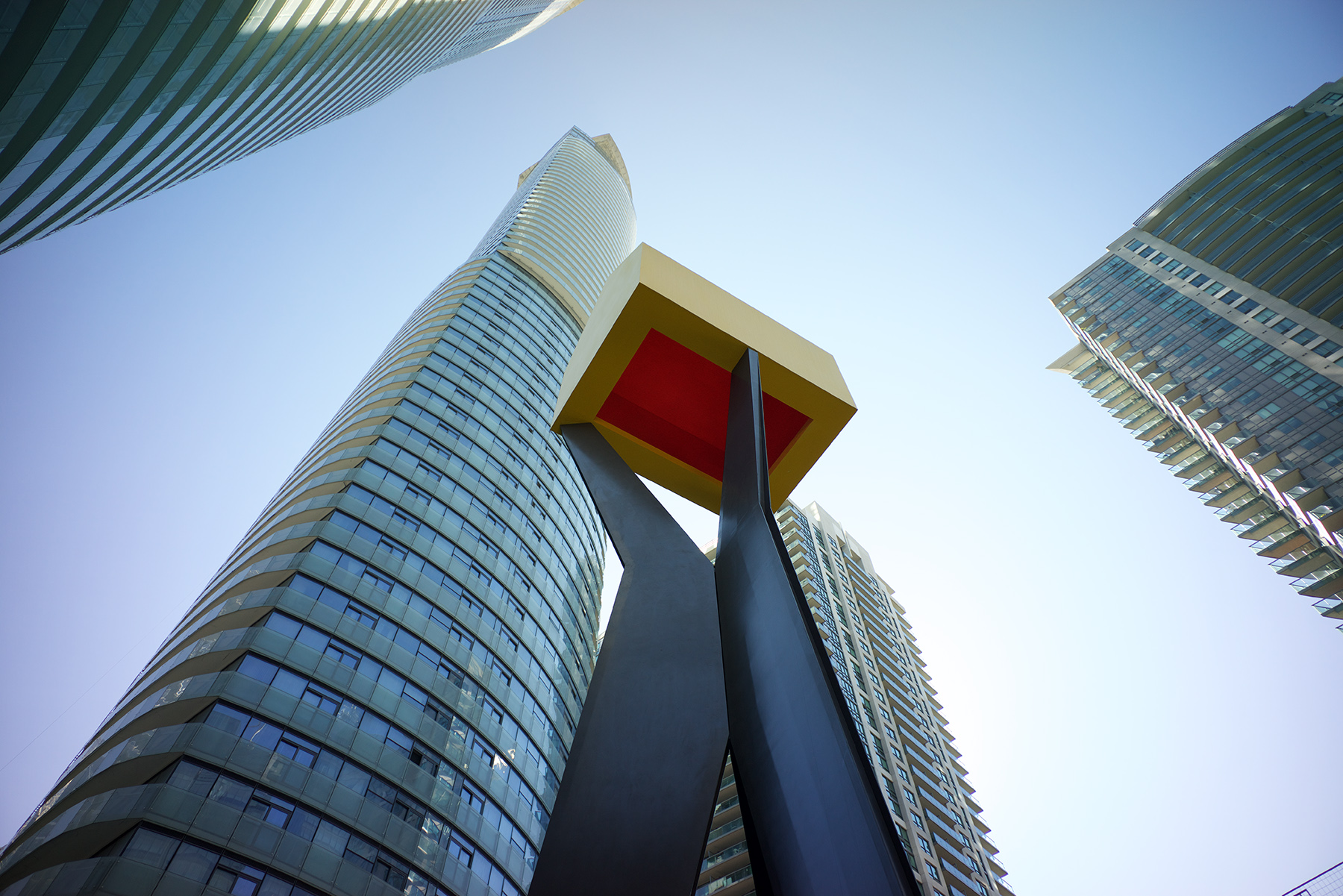 Dream House was installed in February 2015, a major sculpture commission for downtown Toronto. The work is at the heart of the ICE Development, York St.

Dream House takes the form of a diminutive yet powerful three-dimensional ‘house image’, perched atop a mighty sculptural ‘stilt’. The piece is situated off-centre in the ICE courtyard, set slightly towards the northwest. Its scale is such that it projects up into the opening of the green roof canopy so that the 3D ‘house image’ hovers within this oasis space.

Dream House is visible from the ground level of the Plaza, from the dwellings above overlooking the green roof canopy and from the highway south of the site. During daylight hours Dream House is a striking sculptural object with multiple resonances: reminiscent of a tree house, an eyrie or a cabin. The reference to the archetypal ‘house’ object is direct and strong but there is also a sense of nest-like fragility and precariousness in the way Dream House sits, delicately held aloft by the outstretched ‘fingers’ of the robust stilt.

Phaophanit and Oboussier have repeatedly explored the image/concept of the house in their practise as a source or receptacle of poetic images. They explore the house as an archetypal image, cross-cultural in its signification. It is this transcendent resonance that in fact roots Dream House in downtown Toronto and in its surrounding neighbourhoods. With its reputation as one of the most metropolitan cities in the world where trans-cultural ecumenical processes have vastly expanded the boundaries and definitions of ‘belonging’, Toronto is ‘home’ to almost all of the world’s culture groups and is the city where more than 130 languages and dialects are spoken. Dream House claims its own home, nestled within this specific, cosmopolitan locus and can be read as inviting a re-imagining of notions of what it means to belong: how new ideations of home can be created in an expanded, global city such as Toronto. The image of Dream House: a suspended, glowing, archetype, gives form and meaning to what unifies us not what differentiates us.

“The house shelters day-dreaming, the house protects the dreamer”

(Bachelard, ‘The Poetics of Space’)