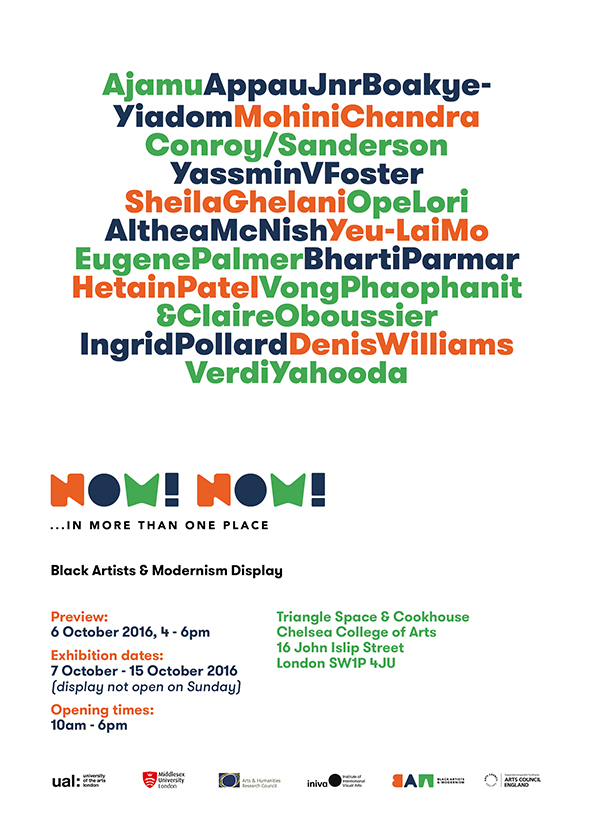 Now! Now! …In More Than One Place

Now! Now! In more than one place, is a display that accompanies the London conference Now & Then… Here & There: Black Artists & Modernism at Chelsea College of Arts and Tate Britain. This major conference (6-8 October 2016) will address the understated connections and points of contention between Black-British artists’ practice and their work’s relationship to modernist histories.

An urge to re-assess the legacies of Black-British artistic practice within a wider discourse of critical themes since the twentieth century, bridges both the conference and the display.

As the title might suggest, Now! Now! In more than one place takes up contradictory positions: as a refrain – in a musical sense, as well as to limit (set a boundary) and scold; or, as an insistence on immediacy and presence.

A combination of works, including painting, photography, drawing, print, video installation, sculpture and publications are brought together spanning the second half of the twentieth century to the present. Spatial and temporal relationships unfold with themes that address a sense of place, or invite us to re-think representations of the body and identities beyond the binaries often cited in relation to race, sexuality and gender. The works also ask us to sustain our attention across several, sometimes fractured, somatic/perambulatory states.

The Now! Now! In more than one place display has been supported by the UAL Chair in Black Art & Design project fund. The accompanying publication has been produced in association with Iniva (Institute of International Visual Arts).