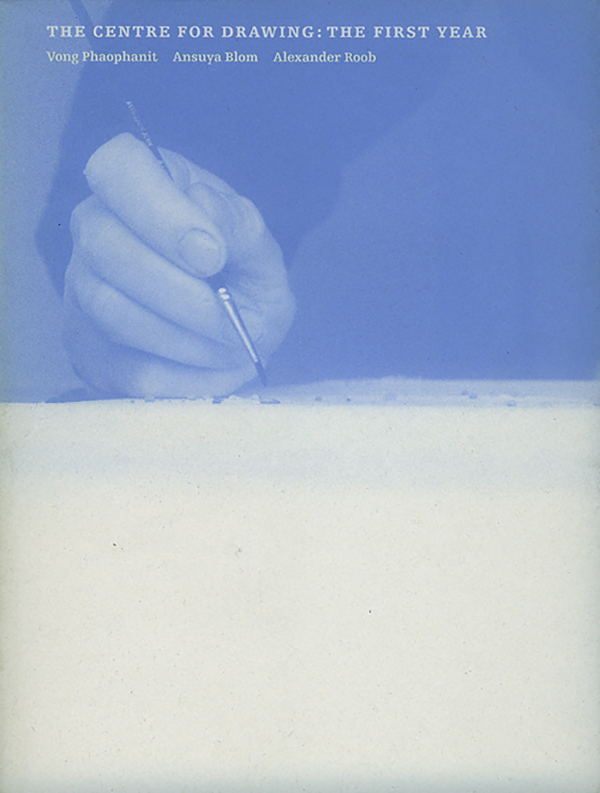 The Centre for Drawing: The First Year

THE CENTRE FOR DRAWING: THE FIRST YEAR

Looking at these drawings, pondering what is sayable about them, I am reminded of a little known piece by Vong Phaophanit commissioned in 1995 and entitled From Light, which includes a circular piece of film without beginning or end. The film has been shot and edited so as to render it equivocal. Its informational level is suspended: is it a seascape or a desertscape? Swept by rain or sand? Is its occasional yellow hue due to fading sunlight, an industrial smog, a post nuclear cloud or simply a technical ruse? This piece manages somehow to be replete with resonance, with atmosphere, and yet simultaneously impossible to locate or identify. What also becomes evident, as the film circulates, is that there is no eye controlling the camera; it tracks the movements of a body and its (the camera’s) own eye is left to play at will, its auto focus desperately grasping at surfaces upon which it might fix, only to blur again as it moves on. It is the oneiric, other worldly quality of this piece, where reference points become abstracted and tease our efforts to restrain meaning, which was recalled by these new drawings.

Reference has always been an important dimension of Vong Phaophanit’s practice. It has been approached and challenged in various ways; ironically, wittily, teasingly and occasionally politically. The artist has often achieved this by discreetly subverting the narratives attached to the materials he uses, reasserting their very materiality and creating new fusions of substances. This play of metaphor, material and cultural reference, the particular alchemy of these elements as they lived and breathed in the works, could lead on occasions to a kind of silence, a suspension of chatter, where generation of meaning becomes possible. It is as if the residency at Wimbledon freed Phaophanit to make an excursus further into this dimension of his practice. The return to drawing (and it was a return, as drawing had been Phaophanit’s formative and fundamental art practice) allowed a more direct, visceral approach to this process of transfusion.

The paradox of directness and mediation in the making of art has been exquisitely explored in the terms of his previous work, where cultural encoding is always brought into a living, organic relation­ship with sensuous production, creating a kind of in betweeness. Guy Brett, in conversation with Phaophanit, was receptive to this duality or paradox in the drawings; he speaks of a historical contradiction between the trace and the sign, the trace being an energy or force directly captured and the sign being a cipher that is culturally mediated. He suggests ways in which these two appar­ently polarised fields might possibly come to coalesce (as in the Chinese tradition of calligraphy for example) and sees this kind of embodiment taking place in Phaophanit’s drawings. Phaophanit responds to this suggestion in the following way: ‘Yes, what I’ve tried to do is to increase that ambiguity between the trace and the sign. I would never feel what it is to be in one camp rather than the other. And that’s how I always feel in my life too, the way I perceive reality, the way I use language.’ The drawings seem to be an intimate exploration of this cross fertilisation of signifying fields. He goes on to explain to Guy Brett: ‘there is something that I’m always suspicious about, the notion of purity. I don’t believe in purity, whether it is used in religion, or politics or even in art… I would never join that discourse. I prefer to retain my position in between.’

Phaophanit’s practice has always been articulated in this interstitial space. In a recent conversation he spoke to me of how he addressed this in his approach to the drawings. ‘I found it very difficult to start a drawing. On one hand, you want to be fully prepared, fully in control [but] at the same time your emotion, your energy somehow tends to dictate something else.’ He describes a kind of ritual where in the mornings, for two hours, he would try to ‘evacuate the other works’ (previous and other current works). It was through the dot series that he was able to do this; he describes this series as being between the conscious and the unconscious, between the intuitive and the intentional, as floating between control and the uncontrol­lable. At first he worked with drops of pure water which he then returned to and ‘injected’ colour into. He explained that this exercise ‘brought me closer to drawing’ and that finally it came to have a visual significance of its own. Then in the afternoons he started to draw ‘and then it was very free. I let forms come, sometimes hard, dry forms and at other times fluid, mercurial forms… sometimes very fast, like I was throwing them out.’ Some of these drawings were left in that first state. Others he returned to and reworked   but not in order to perfect or finish them but rather to ‘efface the traces’, traces that is of reference, of structure, of ‘attachment’. This was a process of perpetually enlarging the space of the drawing itself, of eliding narratives and forms that could attenuate that space, a process of distancing definition. And then what also became vital to the drawing process was how to stop, when to, as Phaophanit puts it ‘lever les mains’ (raise your hands). Sometimes he made this exit by effacing or diluting, at other times he marked it strongly on the page.

It is not that Phaophanit is insisting that the drawings be free of reference but rather that they cannot refer to any pre existing narratives. They must arrive at the point where they can exist on their own terms, in their own idiom. The chosen method of titling the drawings is an extension of this. Set phrases, metaphors, figures of speech have been disseminated, scattered into meaningless fragments and then simply assigned to the drawing with which they seemed to have some physical affinity.

This opening up of reference and of meaning is poignantly addressed through the ’empty gesture’ series of drawings. Rendered in white pigment, human figures float like blanched shadows on the page, engaged in some activity but with the object of that activity effaced. Their gestures have become functionless, without cultural reason. That to which we would normally turn to establish the meaning of the image, to enable us to ground it and to identify it in some way, has been lifted out, leaving us momentarily tantalised and then curiously calmed. As viewers, we are strangely liberated by this lack of anecdotal information. The gesture itself would somehow have been much less allusive, much less accessible to the imaginary, had its object been present. The white used in this series of ‘invisible drawings’ literally challenges our act of looking; we have to move and shift continually so that the light catches the surface of the dried pigment and creates a reflection that renders the image visible. Phaophanit describes the way he worked on this series: ‘You have to move fast. If the ink dries you can no longer see what you are drawing and you can never see the whole picture while you work. You are in a constant state of doubt, of risk.’ It is for this reason that the figurative was chosen uniquely for this series. An abstract form would not have presented the same challenge or engendered the same risk. Here the image was fleeing before his eyes as he worked on it  ‘It was like losing your sight while working, like walking in a fog   you can’t see in front or behind, just where you are at that moment.’

The drawings Phaophanit produced during his time in residence at the Centre for Drawing are offerings in the sense that Bataille has written about. Bataille explored the realm of the gift, and others after him such as Cixous have expanded these ideas through the French notion of dépense, with its playful duality of meaning. Expressing both expenditure without thought of return and, literally, the undoing of thought, dépense embraces those dimensions of human culture that are irreducible to the orthodox dyad of production and consumption. Phaophanit’s new drawings emerge from an economy such as this; one of risk, of giving wherein there has been a relinquishment of the constraints of conscious thought. They issue from a working process which has dispensed with the safety net.